⚔️ How to Play Fantasy League of Legends

Learn how to play LoL on Sleeper

First, get the Sleeper mobile app

To play Fantasy League of Legends, you will need to download the Sleeper app. LoL is not currently available on the desktop site.

Whether you know everything about League of Legends and can name all of the 148 champions, or know next to nothing about the game, you can play and win your fantasy league.

You can learn the basics of fantasy sports here

Like NFL or NBA fantasy, you don't actually need to know or understand all of the rules, players, or stats. Of course, it may help to learn those types of things, but if you put in a little research on which players to draft or add and you have as good of a chance of winning as anyone else in the league.

A fantasy LoL season happens twice a year. Each season takes place over the nine weeks of each one of the two splits.  The first runs from January through April and consists of seven regular-season weeks followed by two playoff weeks, depending on your league settings.

Then, there is a break and the second split begins in June and runs through November, with the same regular season and playoff lengths as the first split.

Start by joining or creating a league and familiarizing yourself with the scoring settings, and what stats can award your team points.

You can learn how to create a league and invite friends here.

There are some basic stats like kills, deaths, and assists that are the most common.

Minions spawn from a team's nexus and will follow a lane and attack anything in their way, so your player can get points by killing them as well.

The individual stats contribute, too, of course. Drawing first blood or conducting a solo kill are ways to earn extra points. Your player can also get points for having the most minions killed at the 15-minute mark.

The biggest amount of points typically come from kills and assists, but there are bonuses that are achievable every game, which consists of eliminating some of the game's strongest monsters.

Baron is a neutral monster who will attack whichever target is closest, so it requires some teamwork to take him down.

The team that destroys one of their enemy's turrets, or towers, can gain bonus points, along with killing the first Drake or Baron. A Drake is a dragon that will spawn periodically.

A Soul Drake bonus is awarded for the team that has controlled the drake for the majority of the game.

You can learn more about the different Drakes and what they do here.

There can be up to 10 teams in a league, and each team will draft five players.

You can learn more about what a draft entails. 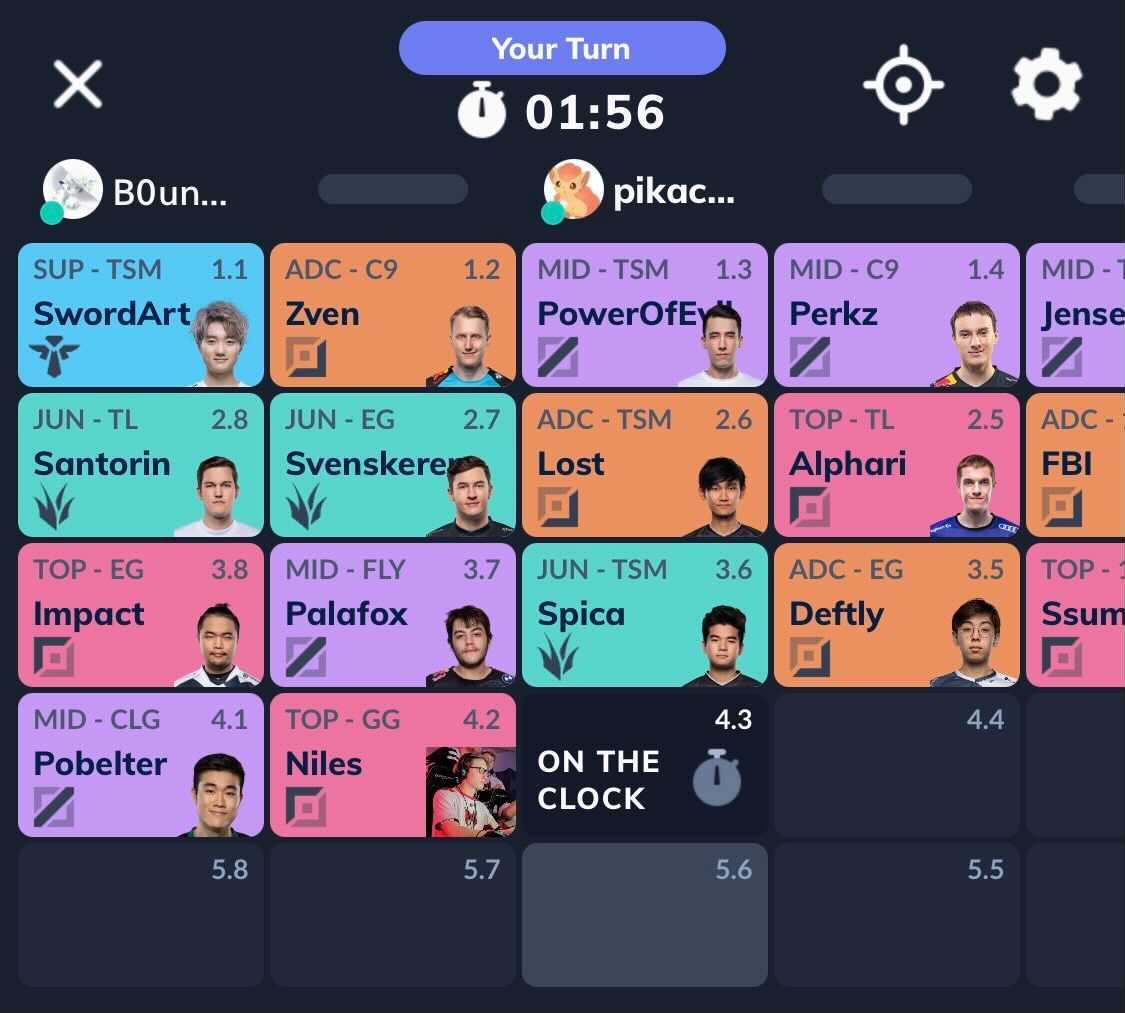 The five players that make up your roster will consist of one in each of the different player roles: 1 TOP, 1 JUN, 1 MID, 1 BOT, and 1 SUP.

We’re bringing the concept of picks and bans to weekly strategy, so you can feel like a real coach of a team. In previous fantasy games, there wasn't much week-to-week strategy, so we added this twist to it, which could easily make the difference in any weekly matchup.

Instead of having to set a lineup like in other sports, every week, each team can select one champion per player they own to accumulate double the points. Carefully consider your options as to which champion you think will be your highest scorer of the week.

Additionally, each user can select one champion per player to ban from the opponent's lineup for that week. That means those points will not count in your league's matchup, regardless of how many that champion accumulates.

If the pick and ban are the same champions, it will cancel out and the regular points will apply.

We introduced picks and bans because it changes up the gameplay.

Finally, once the games begin, you can track how your players are doing in real-time. You'll be able to view Kills/Deaths/Assists and bonus points, as well as your champion pick and ban bonuses compared to points you would have had if you didn't get those pick and ban bonuses. 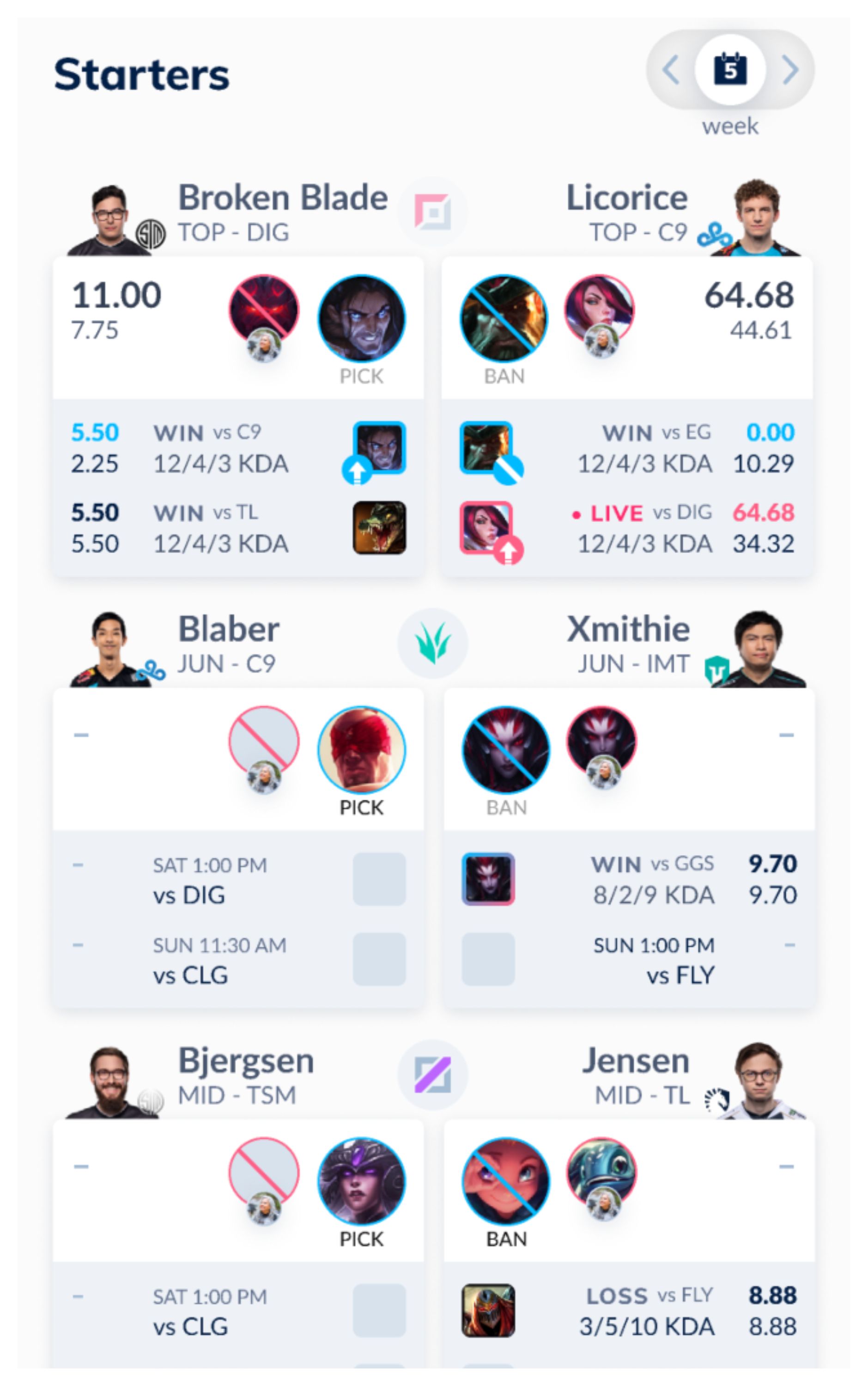 If you're wondering how to play the actual League of Legends game, there is a great beginner's guide on Youtube.