All Collections
Fantasy Football
Drafting
Can I do a dispersal draft?

Can I do a dispersal draft?

Learn the best way to conduct a dispersal draft on Sleeper

The most common reason for a dispersal draft is that an owner abandons their team, but the rest of the league wants to continue.

We don't have a specific option to do a dispersal draft and it will take some manual work, but we do have a way of making it work. Please follow the steps below closely and carefully.

In this example, we're going to pretend that our 12-team league wants to go down to 10 teams. Scroll down further to learn how to do a dispersal draft midseason.

We want those players from the 2 teams leaving to be made available in a draft for everybody else.

Step 2 - This step requires some advanced actions. If you're not comfortable making these changes or need some assistance, please contact us at [email protected].

You'll need to go to your Member Settings. We will need to get the 2 teams that are leaving moved to the bottom of the list if they're not already.

So if we have 12 teams and are cutting 2 of them, the teams in the 11th and 12th spots are the ones that will get cut. 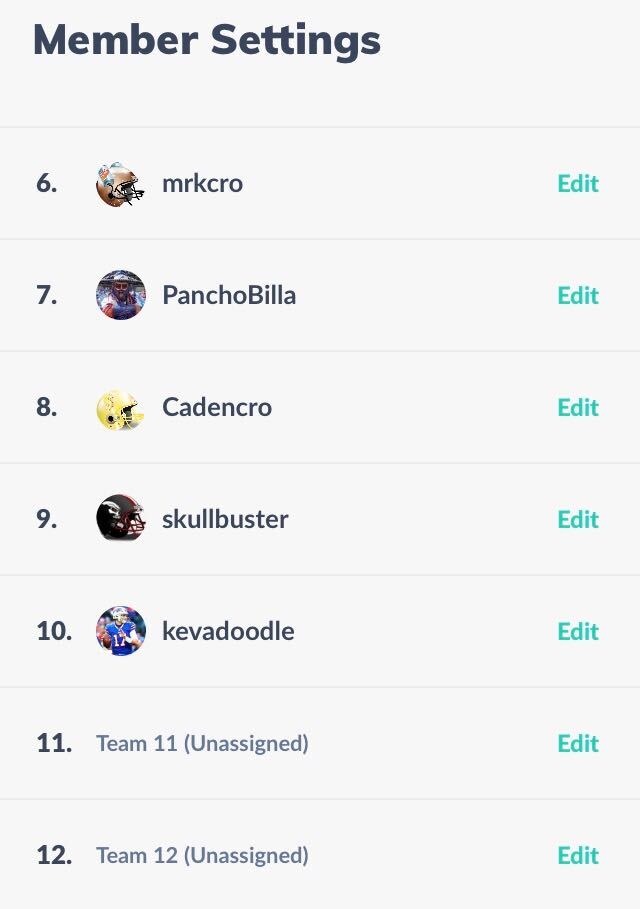 On the mobile app, go to the commish settings -> Edit Roster & Draft Picks and choose the option of “switch players to a roster” -> tap the team that is currently in spot 11 and swap the players with the team you want to remove. Do the same thing for spot 12.

Then, go to your member settings, and re-assign the owners to the correct teams.

After this, you should have the two teams you're dropping at the very bottom of the list, with their correct owners and players.

Step 4 - Go to your league settings and decrease the number of teams from 12 to 10. This will drop all players from those 2 teams immediately.

Step 5 - Create a supplemental draft that includes all players. Set it to the desired number of rounds, set a draft order, and start drafting. The dropped players will be available in the player pool.

We don't have a way of cutting down your league size once the season has started.

You will have to keep the abandoned teams in your league. You can customize the schedule as needed, but they will still have an opponent each week.

Some leagues use this as a bye or an automatic win for teams, or some will adjust the abandoned team's points to the league median each week.

Dispersing their players - The best thing to do at this point would be to use a mock draftboard to help track this.

You'll want to create a mock draft board, invite your owners, and set a draft order.

While all players would be available in the mock draft, tell your owners that they can only draft players who were on the abandoned team. The draftboard will allow you to keep track of the picks and the order.

As commissioner, you can use the commish tools in the app to send the drafted players to the new team. You can do that while the draft is happening or at the end of it.