All Collections
Fantasy Football
Drafting
How does the draft timer work?

How does the draft timer work?

First off, your league's draft will never begin until the commissioner selects "Begin Draft". Even if your draft is scheduled for 7 p.m. it will never start and nobody will be able to make a pick.

This is intentional as too many times we've had to wait for a few stragglers to log on or wait for someone to arrive with the pizza.

Only the commissioner can set the rest of the league to auto-pick. Individual teams do not have that option, so the draft timer will always run out and then make a selection.

For those who don't want to wait the full time, the commissioner can press on the current tile and select "Force CPU Auto Pick". This will draft according to that team's queue if they have one set up. It will also take into consideration what positions the team needs, and it will take one of the higher-ranked players available.

If the commissioner has auto picked turned off, and a team runs out of time to make their pick, you'll find that nothing will happen. We call this our soft draft timer. 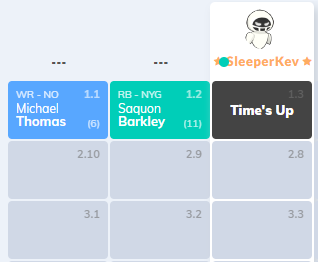 This option is often used mostly as a pause overnight. Leagues won't have to worry about auto picks happening overnight. Just turn auto pick off and teams will be able to make picks throughout the night, but won't be penalized if they run out of time.

The commissioner can pause the draft at any time for however long they'd like, for whatever reason.

When the draft is paused, nobody is able to make any picks. Once the draft is resumed, the team that was on the clock has the timer reset.

We currently do not have the ability to offer an automatic overnight pause. That's something we hope to add in the future, though.

A common reason the draft is paused is so that the commissioner can update the time per pick. They can do this at any point in the draft.