How to I set a Draft Time or change Draft Settings?

Once you've setup or renewed your league, you can begin the setup of your Draft!

In the Mobile App, the Draft Time can be set by clicking on the "Set Time" Icon. This can be changed again at anytime afterwards! 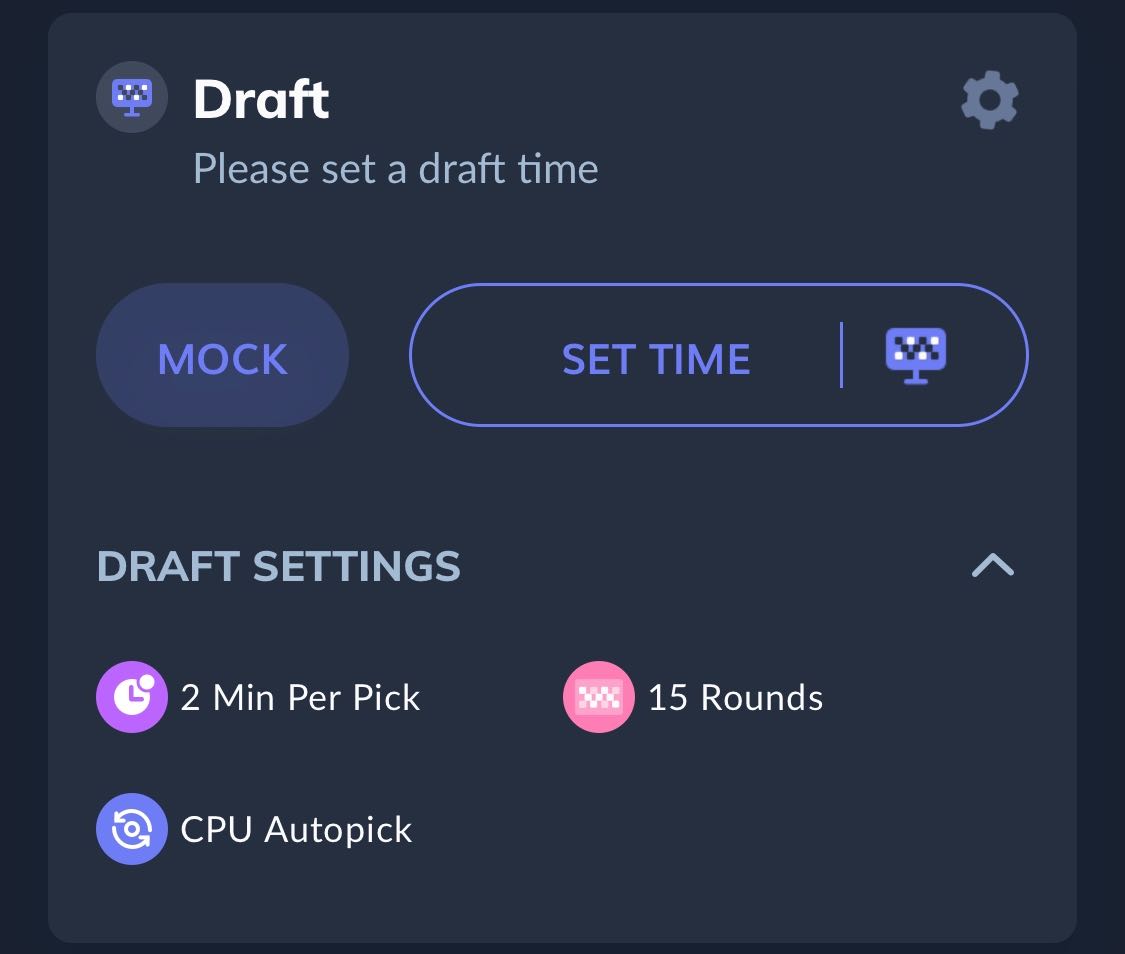 In the Mobile App, Draft Settings can be accessed via General League Settings or through the Settings Icon on Draft Settings Preview Screen.  Time per Pick: Set the desired time-limit per pick. Can be set to a wide range from 1 minute to no limit.

CPU Autopick: Switching this ON, allows for the CPU to Autopick a player for a Team that misses the cutoff based on the Time per Pick. If this is switched to OFF, the draft will pause whenever the Pick Timer expires.

Draft Order: The Draft Order of teams can be pre-determined and/or customized prior to the Draft. For convenience, we have a 'Randomize' button, that will randomly sort your league into a new order, from its currently assigned positions.

All Players to Draft: Set to All or specify to include only Rookie or only Veteran Players. For most Standard Redraft or Keeper Leagues, this will likely be selected as All. Typically these additional customizations are only utilized by Dynasty Leagues.

Draft Type: Currently, Sleeper supports two types of Drafts, Snake and Linear. Both of these formats have teams pick in a particular order, based on draft positions over a period of rounds.

Alphabetic Sorting: Most leagues will likely have this settings switched to OFF, to view provided ADP information. However, switching this ON, will have players listed in Alphabetical Order (First Name, Last Name), without ADP guidance.

Reset Draft: If for example, your draft accidentally begins or is completed, you can use this tool to reset the entire draft, and select a new Draft Time.

Mock Draft: The "Mock" button allows you to mock (and test) draft under your draft and league settings! Feel free to do this solo, or invite friends to mock together!

Draft Rounds: The number of Rounds in a Draft, is dependent on the number of Roster Spots allowed per team. This is controlled under Roster Settings.

Search Tool: Regardless of Alphabetic Sorting or other changes in player ADP or projections, you can always search within the draft for targeted players, and add them to your Draft Que.