There are a couple of waivers options that you can have on at the same time.
The After Game Waivers are used for in-season while the Custom Daily Waivers are used more for the off-season, but can still be used at any time.

After Game Waivers - This setting allows your league to specify when players clear waivers after playing in a game. Whether they play on Thursday night or Sunday afternoon, that player will not be able to be added until the day that you choose. However, claims could be made during that period, and you’re also able to turn off waivers completely.

Daily Custom Waivers - You can choose a specific time of the day or night for waiver claims to clear every 24 hours. 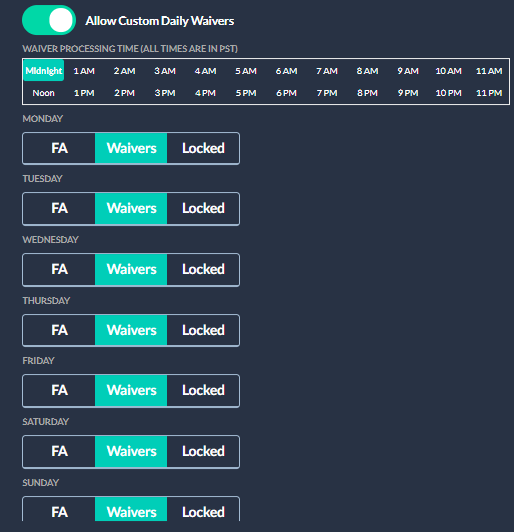 "Why are all of the players free agents after our draft?"

You'll need to turn on these Daily Custom Waivers in order to prevent all undrafted players from becoming free agents immediately after your draft.

This is the only way that you can have offseason waivers.

What if I enable both?

If both options are enabled, the pending claims would be pushed back to whichever has the later time.

Using the example above, players would be on waivers from the start of their games until the end of the day on Tuesday. Then, waivers would process every day at 8 a.m. until their individual games start the following week.

What if I choose neither?

By choosing neither, all players will be free agents and can be added immediately by any owner.