All Collections
Fantasy Football
Drafting
How to Create a Supplemental Draft

How to Create a Supplemental Draft

Learn how to set up multiple drafts in your fantasy league

Are you wondering if you can have a veteran draft, followed by a rookie draft? Do you want to have another draft after that?

You can absolutely have two (or more) drafts in your league. There isn't a limit to how many drafts you can have.

You'll want to go into your league settings and change the League Type to Dynasty. That will give you the ability to add a supplemental draft. You can always change the league type back to redraft or keeper later.

The draft that you see when you first create a league will be your startup draft. You can modify the settings to "Vets" to ensure that only non-rookies can be drafted. 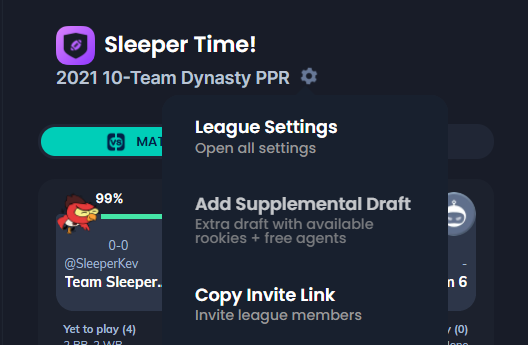 Your league will re-enter pre-draft mode, but it will preserve the previous draft picks and rosters from the initial draft.

This new draft can be your rookie draft. Just modify the draft settings in that draftboard and set it to rookies only.