All Collections
Draftboards
What draft types are supported?

What draft types are supported?

Written by Nan Wang
Updated over a week ago

Keeper simply means you select a certain amount of players to keep going into the next year. For example, let's say your league decides to have two keepers every year. You'll keep the two best players from your roster in 2015, and then the league re-drafts the rest of the players who are not kept. Keeper rules can vary quite a bit across leagues. It is up to the commissioner and league members to decide what keeper rules they would like to institute. To set keepers, just ask your commissioner to enter the keepers onto the draftboard before your draft begins. Your commissioner has full edit control over the draftboard, and can set players in advance by double clicking into any square on the draftboard and choosing players to keep in advance. 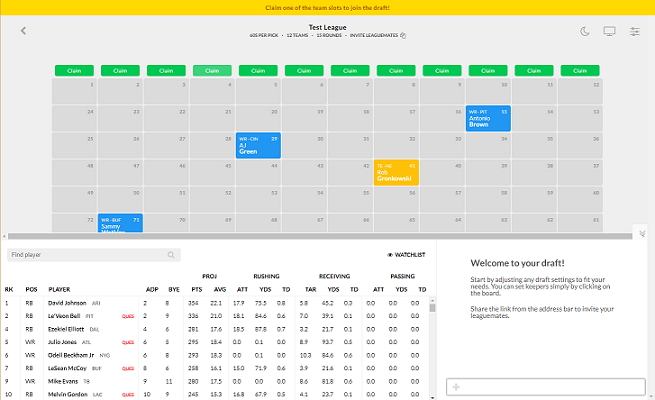 Dynasty owners can keep an entire roster for the next season. These leagues keep most or all of the players on a team, and force owners to think about the future. If you're starting a dynasty league, the first draft will need to focus on setting yourself up for long-term success.

Sleeper will offer the ability to roll your rosters over at the end of the season to start a dynasty league. Your league data will be stored so that you can easily restart the league with your friends at the start of next season.

Rookie Only / Vets Only drafts

We also support drafts that are Rookie-only or Vets only:

This option is accessible via the draft settings for your league:
https://support.sleeper.app/leagues/dynasty/how-to-do-a-rookies-only-or-vets-only-draft

In Auction leagues, instead of having a snake order of picks, owners start with a set amount of money to bid on players. Any owner can bid at any time, as long as they have money left. You have to choose wisely, though. If you blow all your money on Antonio Brown and Todd Gurley, your remaining funds won't help you fill out your roster well.

We do not currently support auction drafts, but plan on adding this functionality next season.