All Collections
Why Sleeper?
Why you should use Sleeper for any draft

Why you should use Sleeper for any draft

How we fixed the problems we faced when drafting on ESPN, Yahoo! and other platforms

If you are a commissioner of a fantasy football league, you'll know that many problems can occur on draft day.

Many times, we've used draft software that had a limitation here or there that ruined the entire draft and caused headaches for everyone involved. Here's what you can get by using Sleeper's draftboard.

Some of our fantasy football drafts are done in person, so we've always wanted a way to put a draftboard on the big screen.

Sleeper allows you to do this with Big Screen Mode!

You can use big screen mode to cast your draftboard to your big screen TV on one tab while drafting on another tab.

Most draft software is designed to show you picks in a list view, which prevents you from looking at your draft holistically.

We said goodbye to the list view, and decided to go with a draftboard interface: 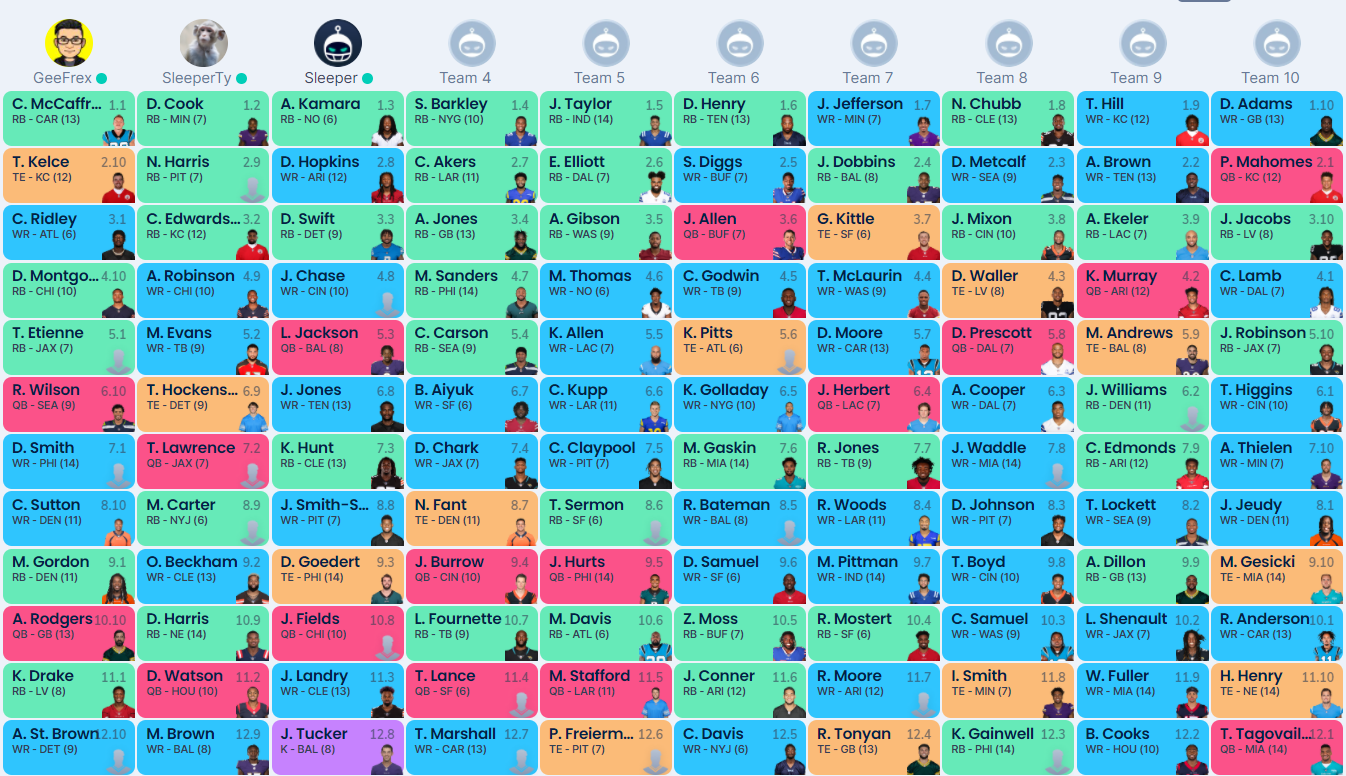 By seeing the entire board, you gain extra context into when your turn is, what your opponents have been drafting recently, position runs, and players that might become unavailable when it is your turn.

This information is absolutely critical during a draft, where you may not have that much time to make a decision.

If you are presenting your draft on the big screen, you can impress your leaguemates by using either light or dark mode.

Dark mode is a beautiful skin for your draftboard that offers a truly immersive feel and is an integral piece for an authentic draft experience. No other draftboard focuses this much effort on presentation.

On ESPN, Yahoo!, and other platforms, we have to set a draft time in advance and stick to that time no matter what.

Countless times, we've needed to push back the draft 30 minutes to 1 hour due to team meetings or people stuck in traffic, and have ended up with a few auto picks for the first 2 rounds, when everyone would have been fine waiting an extra 30 minutes.

The auto-picked owners become disgruntled and give up before the season begins, and in some cases, don't even pay up.

While Sleeper draftboards have a draft start time, the draft doesn't begin until the Commissioner is ready and clicks on Begin Draft.

Many times, we've needed to pause the draft in the middle of a draft due to an unforeseen event, such as pizza delivery, or a leaguemate leaving to go to the restroom.

With Sleeper, commissioners can pause the draft indefinitely if any issue arises.

Commissioners can have the draft take place over multiple days if necessary.

Our draft typically starts with a 2-minute timer as the first 4 rounds are critical. When we wanted to make the later rounds move faster with 1-minute timers on Yahoo! & ESPN, it was not possible, forcing our draft to drag on forever.  Owners lose interest mid-draft, and drop off, auto-picking the rest of the way.

With Sleeper, commissioners alter the pick timer right in the middle of the draft.

Sometimes, we have an owner who accidentally puts a player in their queue that they did not intend to draft that round, and the draft software automatically picks a player from the queue 3 rounds too early due to an owner's internet disconnecting.

One year, an owner picked their sleeper tight end with the first overall pick due to this problem.

As a commissioner, you have the ability to undo any pick from any round, so these types of problems are completely avoided.

Not only can you trade before the draft, but Sleeper allows you to trade draft picks in the middle of the draft as well.

Many times, picks are traded during the draft after intense negotiations. 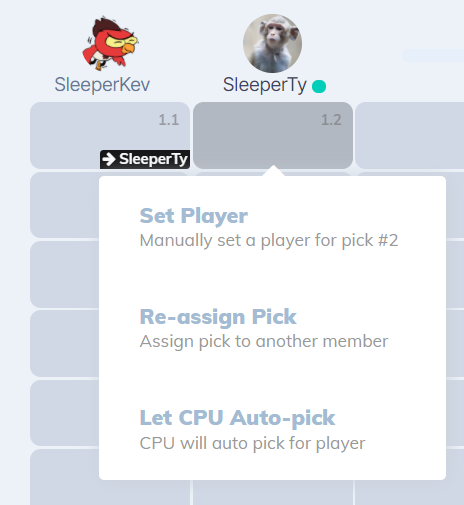 Last year, one of my leagues moved to a slow draft format, with 8-hour pick windows as everyone was very busy and we could not agree on a draft time.

This is the only draftboard of the major platforms to allow slow drafts.

In addition, CPU auto-pick can be turned off completely to be more forgiving to the user and allow the commissioner how to handle cases where an owner runs out of time.

Sleeper draftboards are designed to be intuitive right out of the box, but be flexible enough to handle any problem that arises. If you are looking for a smooth experience with an interface your leaguemates will love, give our draftboard a whirl.

Feel free to do some mock drafts to get familiar with the interface.